Slang terms for tape are something of a hobby around here, and we’re always on the lookout for new ones.

The latest is “scribble strip” which is apparently a term used to describe the tape applied to a mixing console for labeling the inputs.

Use it at your own risk and expect to be laughed out of the venue by a real pro audio professional.

When I used to mix sound regularly, it seemed like every time I turned around, my console tape had disappeared.

It turns out that there are lots of uses besides console labeling on event and show sites. 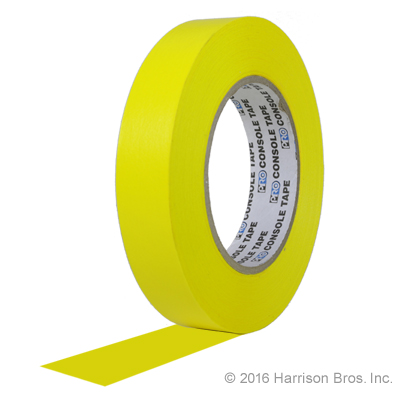 Bored with the usual white console tape? Time to bust out the good stuff!
Pro Tapes and specialties now offers console tape in lots of colors.
You can get it in standard colors like red, yellow and blue and also in neon, glow in the dark colors like orange, green and pink.

All have the same quality non-residue adhesive like the white stuff and there is no Sharpie Marker print through.

Rolls of tape on sets and stages have a way of sprouting legs and walking away.  A request to “borrow” a little tape quickly turns into a permanent borrowing.  The borrower had good intentions regarding returning the tape, but it just never happened.  At the end of the day it wound up in somebody else’s tool box, someone who had managed to convince themselves that the tape was theirs.

You’ve got a roll of console labeling tape and you’ve got a Sharpie Marker in your pocket.  Time to solve this problem.

Write your name on the inner hub of the tape roll so that whomever borrows it will be sure that it s never theirs.  Better yet, write “stolen from )your name)”.

That roll of tape will magically find its way back to you, or most of it anyway.

Some mixing consoles (festival, club, etc.) get relabeled constantaly. It is not unusual to generate new labels several times in a single day.

Other consoles, those used by touring acts, may not need relabeling for months.

The “repositionable” adhesive that is admired because of clean removal will eventually cause the tape to curl up at the edges. Attempts to stick it back down become less and less successful.

If you find yourself in this situation, use just a little more tape for your label strip, wrapping it around both edges of the mixing desk.

That will make it less likely to curl and release, since the tape that is wrapped around the edges never comes in contact with your hands.

The repositionable adhesive on Shurtape 724 console labeling tape is subject to curling when exposed to high heat.  If the surface you apply the tape to is very warm, the tape will slowly release from the console surface and start to curl up on its ends.  As long as the tape and the mixer are both hot, no matter how many times you press the tape down, it will curl up again.

If you have options on where you apply tape labels, use the surface area on the console that is coolest to the touch.

One of the often overlooked qualities of Shurtape 724 console labeling tape is that it is “PH neutral”. PH is a measure of acidic someting is, and the adhesive in Shurtape 724 falls in the middle of the scale between acidic and alkaline.

PH specifically meas “potential of hydrogen” and in the case of tape, it references how likely console tape is to cause corrosion.

Since it is not uncommon for labels on electronic equipment to stay in place for many months, knowing that the tape adhesive will not interact with the paint and screen printing on a piece of equipment makes a big difference.

You can count on this “neutrality” of Shurtape 724 to protect expensive equipment and sensitive surfaces.

One of the least understood words in the tape glossary is “flatback”, and it is one of the most important features in a good console tape.

“Flatback” refers to the tape having a smooth finish and differentiates from a crepe finish (masking tape) or the rough finish that woven cloth tapes have.

Unlike vinyl tapes, which also tend to be smooth, a flatback paper tape has a finish that can be printed on or written on with an indelible marker without worry about print through.

When you are considering what to use to label any expensive electronic equipment, make sure it is flatback paper.

The more a mixing console is used, the more problems you may have getting label tape to stick.

The big culprit here (unless you spilled a beer on your mixer) is skin oil. This invisible contaminant builds up a little every time you touch the desk, and is even more of a problem if you are sweating.

The oils in your hands and in your sweat reject the adhesive on the tape, causing it to curl and slip on a surface that may appear clean to the eye.

A quick rub  with a hand wipe is ususally enough to solve the problem.

Larger buildups may require using a lint free cloth with a little mild soap.  Alcohol will work as well.

Whatever you use, make sure you completely dry it off.

One of the reasons that Shurtape 724 is prized as a console labeling tape is because indelible markers like Sharpies don’t smear when they are used to make labels.

Unfortunately, it is not quite that simple.

While Sharpie Marker won’t smear if you let it dry, touching it too soon can create a real mess.

This tape is a “coated” product, which means that it has a top coat that is designed to provide a small level of waterproofing and stain rejection.

That means that the marker ink won’t dry instantly, like it will on a more absorbent surface.

Fortunately, ink will dry to an indelible label in just a few seconds. It is worth the wait.